Lasers are classified for safety purposes based on their potential for causing injury to humans’eyes and skin.

Most green laser pointers products are required by law to have a label listing the Class. It will be listed either in Arabic numerals (1 2, 3A, 3B, 4) or in Roman numerals (I, II, IIIA, IIIB, IV).

Classe 1 Laser Pointer: Output power can not cause eye damage.

Classe 2 Laser Pointer: The output power is less than 1 mW. If exposed, natural reflex to blink and turn his head enough to protect from the risk of injury.

Classe 3A Laser Pointer: The output power is less than 5 mW, which limits the power reaching the retina to 1 mW when the pupil is dilated at maximum (estimated opening 7 mm).Therefore, the accidental exposure to a laser class 3A should not be more dangerous than exposure to a class 2 laser.

Classe 3B Laser Pointer: The output power is less than 500 mW, sufficient to cause eye injuries that are described from a capacity of 150 MW.

Classe 4 Laser Pointer: The output power exceeds 500 mW. These high power laser pointer can cause eye and skin damage and even cause inflammation of the objects on which they are directed.

For visible-beam consumer lasers, there are four main classes. Each is described in more detail here: Class 2, Class 3A, Class 3B and Class 4. The first two Classes are relatively safe for eye exposure; the last two are hazardous. The chart below shows how the eye injury hazard increases as the laser’s power increases.

The detailed information given below is for laser light that is visible — between 400 and 700 nanometers — and for an unintentional exposure of less than 1/4 second. Consult other sources for classifications of infrared and ultraviolet lasers, or other visible-light exposure durations. 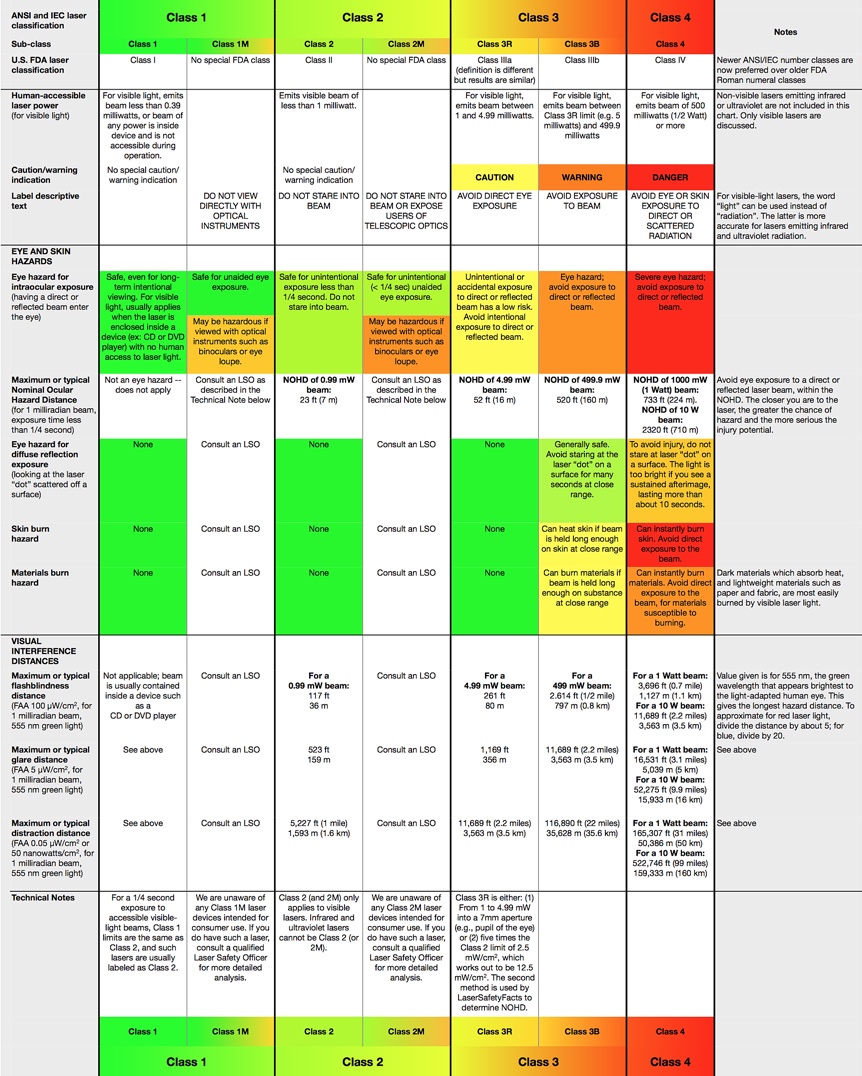 See also next picture. This shows the distances at which various consumer lasers are eye, skin, and fire hazards, and are visual interference hazards: flashblindness, glare and distraction.