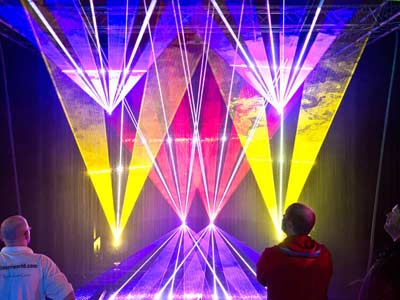 What is a Laser Show?

A laser show defines the use of laser light for entertainment purposes. This means generally that the light of one or more laser beams get deviated so fast, thus effects occur. There are two types of laser shows: First, the so called beam show or indoor show, where laser beams are directed into the audience (known as audience scanning) or above the viewer. Secondly, the graphic show, often also called projection show: With the help of very fast deflection of one or more high power laser beam patterns, graphics, texts, logos etc. are projected onto a solid surface. Depending on size and complexity of the laser shows, beam and graphic show can be combined for e.g. story telling or to add an extra dramatic moment to the show.

Also a laser show can be live controlled, a so called live laser show. This kind of laser show is the most used one, because there is no extensive programming needed. Furthermore the show can optionally adapt to every music played. The disadvantage of a live laser show is that it is not always easy to keep the synchronicity of the music. But more challenging is the individual and different control systems of different laser projectors within the scope of a live laser show event: In this case knowledge and ability of a laser operator is required, which only can be acquired by expert knowledge.

Where can Laser Shows be used?

Laser shows can be used for different kinds of events. The classical application at a nightclub is no longer the only kind of application: Laser shows (in combination with a multimedia show) are already an integral part of cruise ships; also many amusement parks use a wide range of show green laser pointers applications for entertainment. Even major car manufactures insert laser shows at their product presentations. Fact is that laser shows become more and more popular as a great alternative to normal fireworks at city festivals: This amazing outdoor laser show will be an unforgettable experience for everybody! An experience which more and more brides and grooms like to share with family and friends at their wedding. Sport clubs all over the world – American Football, Baseball, Soccer, Basketball or Ice Hockey – use the emotionality of a laser show at half-time breaks to entertain the sport fans as well as a way to display advertisement and information. Also for advertising laser become increasingly important. Extremely eye-catching laser projections are taking over the part of old-fashioned billboards, which are losing customer coverage. The strongest video projectors are often too weak to project over long distances. At this point a laser light is particularly well placed, because of the small divergence only minimal energy is lost at the whole projection distance. Therefore projections onto a mountain or at a building are also possible.

How long does a Laser Show normally take place?

It is difficult to measure the normal duration of a laser show. Whereas live laser shows often used as further effects from 11pm to the whole night, time based laser shows are often time-limited because of the limited budget. There are certainly big multimedia shows which take two hours, but in this case the laser is just one effect. Usually “normal” time based laser shows last approx. 10 minutes. This must not be a reference point! But the fact is that in many cases a laser show is combined with a story; if this takes too long, the audience will lost the story of the laser show at a certain point.

What make a Laser Show even more attractive?

High standard laser shows are an emotional, unique experience itself. But there are special features that will make a blue laser show even more fascinating. With the use of further projection surfaces other effects will occur: Gauze screens, water screens or hydro shields are just a few of all possible surfaces. Even 3-dimensional laser effects are realizable due additional surfaces. By using extra multimedia effect a laser show becomes actually more spectacular. (A so called: multimedia show): Video projections are often used as supplement to the laser show (e.g. video mapping), also flamethrowers (Flamer), pyrotechnics and water effects. Laser lights in combination with normal light effects are already standards for laser shows: Light effects built a basic atmosphere and the laser lights create emotional effects and are also the storyteller of the show.

Although audience scanning laser shows are difficult to perform in some countries, this is the most emotional way to present a laser show because laser beams are directed into the audience. In this case it is indispensable that the operator is quite familiar with any applicable safety directives.

This laser effect creates the greatest emotional value because people get the feeling of being part of the show while standing inside the red laser pointer beams.