Of course, the laser pointer emits laser light. The wavelength of laser pointers on the market is generally in the range of visible light, such as red and green. Maybe your Laser pointer is red, but it may also have infrared components. Laser is a light source that is different from general light sources (such as incandescent lamps). One of his characteristics is the small divergence angle. Abbreviation for ordinary light-emitting diode (light-emitting diode). It is widely seen in daily life, such as indicator lights of household appliances, anti-fog lights on the rear of automobiles, etc. The most notable feature of LED is long service life and high photoelectric conversion efficiency. In the PN junction of some semiconductor materials, when the injected minority carriers and the majority carriers recombine, the excess energy will be released in the form of light, thereby directly converting electrical energy into light energy. With reverse voltage applied to the PN junction, it is difficult to inject minority carriers, so it does not emit light. This kind of diode made by injection electroluminescence principle is called light-emitting diode, commonly known as LED.

There are three main differences:
The difference between the two in principle, structure, and efficiency. The difference in the working principle: LED uses the spontaneous emission of carriers injected into the active area to recombine light, while LD is recombined light-emitting by stimulated radiation. The difference in architecture: LD has an optical resonant cavity to make the generated photons oscillate and amplify in the cavity, while LED does not have a resonant cavity. The difference in efficiency: LED has no critical value characteristics, the spectral density is several orders of magnitude higher than that of LD, the output light power of LED is small, and the divergence angle is large. The laser diode is a light source semiconductor laser invented in the 1960s, also known as the laser tube (Laser Diode). LASER is an abbreviation word formed from the initials of “Light Amplification by Stimulated Emission of Radiation”, usually abbreviated as LD. Since it can produce light with exactly the same properties such as wavelength and phase, high coherence is its biggest feature. 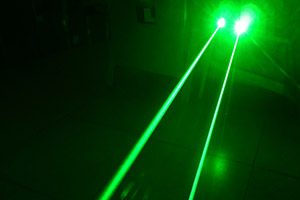