The Laser pointer of laser is different from ordinary light and sunlight. It has physical characteristics such as good directionality, pure color and large energy. In the clinical application of laser, there is a distinction between strong laser and weak laser. The core part of the light-emitting diode is a wafer composed of p-type semiconductor and n-type semiconductor. There is a transition layer between p-type semiconductor and n-type semiconductor, which is called p-n junction. In the PN junction of certain semiconductor materials, when the injected minority carriers and the majority carriers recombine, the excess energy is released in the form of light, thereby directly converting electrical energy into light energy. With reverse voltage applied to the PN junction, it is difficult to inject minority carriers, so it does not emit light. This kind of diode made by injection electroluminescence principle is called light-emitting diode, commonly known as LED. When it is in a forward working state (that is, a positive voltage is applied to both ends), when the current flows from the LED anode to the cathode, the semiconductor crystal emits light of different colors from ultraviolet to infrared, and the intensity of the light is related to the current. 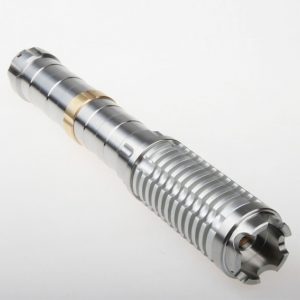 The first LED light source made using the principle of semiconductor P-N junction light emission came out in the early 1960s. The material used at that time was GaAsP, which emits red light (λp=650nm). When the driving current is 20 mA, the luminous flux is only a few thousandths of lumens, and the corresponding luminous efficiency is about 0.1 lumens/watt. LED uses the spontaneous emission of carriers injected into the active region to recombine and emit light. To produce laser light, the following conditions must be met: 1. The number of particles is inverted; 2. There must be a resonant cavity that can play the role of optical feedback and form laser oscillation.