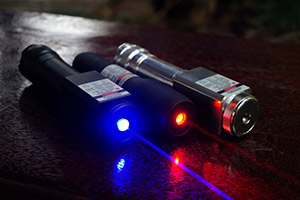 The Turkish Communication Security Research Center has completed the development and testing of two laser pointer systems and plans to equip the Turkish Army. It is understood that both laser systems use continuous wave lasers with a working wavelength of 1070 nanometers (±10 nanometers). The first type of laser system is called a vehicle-mounted laser system, which can be integrated into Ottoka’s “Cobra” 4×4 light armored vehicle. The rear of the “Cobra” armored vehicle is equipped with a 220-kilowatt power supply, and the top is equipped with a tilted high-energy laser. The maximum output power can reach 5 kilowatts. It can be rotated 180° horizontally and vertically, and can be in the range of -30° to 95°. Internal rotation.

The vehicle-mounted laser system includes a thermal camera, daylight camera, laser rangefinder and laser illuminator, which can interfere with cameras and other optical equipment within a maximum range of 7.5 kilometers, damage drones and improvised explosions within a maximum range of 1 kilometers Device. If a radar system is installed, target tracking can be achieved. The second type of laser system is a mobile laser system mounted on a rifle, which can be used to jam drones and can be mounted on weapons equipped with Picatinny rails.

Automatic laser scanning “hunter drone” to facilitate the search for fossils at night. An intelligent hunter drone occasionally appears in science fiction novels. Recently, this technology has become a reality. The Hunter UAV developed by the University of Hong Kong can use scanning lasers to find targets at night. This technology-laser-induced fluorescence-was developed by the University of Hong Kong and has achieved great success in the field of paleontology. It can make fossil bones glow and reveal other invisible details such as skin and cartilage. It is possible to apply LSF to aeronautical systems because the laser has the ability to project to long distances with only a small loss of power.

A research assistant professor at the University of Hong Kong (Earth and Planetary Sciences Department and the Vertebrate Paleontology Laboratory of the Earth Sciences Department) and colleagues from the Science Advancement Foundation have jointly developed a fully autonomous LSF UAV system. This system is called “Laser Raptor”, which aims to find fossils exposed on the ground in the wild more effectively. The drone sets its flight path during the day and launches it over the wilderness of Arizona and Wyoming at night to search for fossils.

The Laser Raptor uses the onboard navigation to fly to the search location quickly, then descend and maintain a height of 4 meters above the ground, so that it can start “harvesting” to find small, shiny objects like nails. After each “task” is completed, the laser-scanned video will be processed to find the hot spots to be investigated the next day, so as to find new fossil specimens.

Fluorescence is extremely sensitive to differences in mineral composition. Although the “green laser pointer Raptor” is designed to find fossils, it is ready to search for a series of fluorescent targets including minerals, such as studying rare and unusual geology or searching for mining materials such as gems, and even archaeological artifacts and structures . When asked about future plans, as members of the Space Research Laboratory of Hong Kong University, my Ph.D. and I are currently working on applying LSF to geological landscape research beyond the earth.